Mount McLoughlin (42.4N, 122.3W) is a basaltic andesite steep-sided lava cone built on shield volcanoes of similar composition. McLoughlin (9,492 feet; 2,894 m) is the tallest volcano between Shasta and Crater Lake but is small in size (3 cubic miles; 13 cubic kilometers). Shasta and Mazama are giants with volumes of 84 cubic miles (350 cubic kilometers) and 30 cubic miles (130 cubic kilometers), respectively. This photograph shows the symmetrical shape of McLoughlin when from the south. However, when viewed from the east or north, it is apparent that part of the volcano is missing. Late Pleistocene glaciers removed the entire north side of the mountain, exposing two conduits and layers breccia and lava. Most of the main cone of Mount McLoughlin is probably less than 200,000 years old, with much of it probably younger. Some flows on the flank of the volcano may be as young as 20,000 to 30,000 years old. 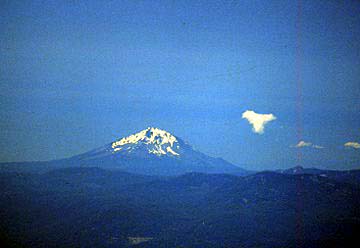 Additional information about McLoughlin is presented on the Cascade Volcano Observatory homepage of the U.S. Geological Survey.