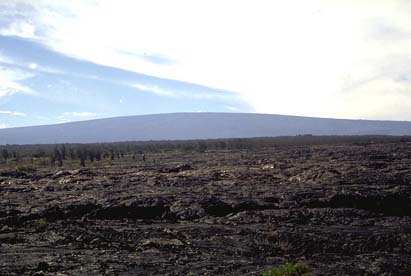 As heating of the lithosphere continues, the degree of partial melting increases and the absolute volume of magma produced really increases. A higher degree of partial melting produces tholeiite basalt, which has a slightly higher % silica than alkalic basalt. It is during this stage that the plumbing systems within the volcanoes are the most efficient at transporting magma to the surface. >95% of each volcano consists of lava erupted during this main tholeiite stage (e.g. Clague 1987). Both Mauna Loa and Kilauea are in this stage of life, and have together erupted ~114 times since the arrival of Westerners. These tholeiite lavas are fluid and can build up only gradual slopes, producing the classic shield volcano shape.

It is also during this stage that a magma chamber fully develops to serve as a way-station for ascending magma. A magma chamber migrates upward as the volcano grows, and the magma chambers of Mauna Loa and Kilauea are both 2-3 km below the summits. Although usually depicted as giant balloons, magma chambers are most probably a complex of smaller interconnected voids (more like a magma chamber complex). This idea has been confirmed at by geodetic measurements that show the center of deformation moving around during periods of inflation and deflation (Fiske & Kinoshita 1969).

The end results of all these processes are that lavas erupted during this main shield stage of volcanic life are: 1) hot and fluid because they have an efficient pre-heated plumbing system to get them to the surface; 2) have already lost some of their gas when they eventually erupt because it escaped while the magma was resting in the magma chamber; 3) possibly olivine-rich if the eruption taps the lower part of the magma chamber; and 4) unlikely to include xenoliths because the xenoliths sank to the bottom of the magma chamber.

Another important consequence of the development of a magma chamber is that it can lead to the formation of a caldera. Calderas result from collapse and/or subsidence into the magma chamber, thus a caldera is a sign that an active magma chamber is or once was present, and this in turn implies a high supply to the volcano. Calderas are very dynamic features, however, and at times they can be completely filled in, only to re-form again later. 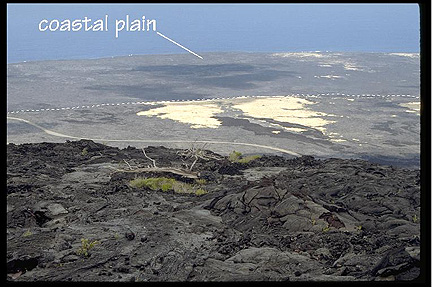 The main products of Hawaiian eruptions are lava flows and pyroclastic deposits. When lava flows encounter the ocean they may spread along the coastline because the water provides a cooling barrier that slows the forward progress. This results in the formation of a relatively flat lava shelf, even if the slopes directly inland and offshore are steep. The coalescence of numerous shelves forms a coastal plain (see left). The frequent eruptions during the tholeiite stage mean that construction of the coastal plain is able to keep pace with the subsidence of the volcano, and indeed the parts of Kilauea and Mauna Loa that have the most young flows are characterized by well-developed coastal terraces.