A thick plume, ~9 km in diameter, rose to ~7.5 km above sea level and drifted SE on June 11. Shorter ones rising to heights of 2.5 km were also observed on June 13 and 14. A thin lava flow was visible on the volcano's W flank. The current activity is further believed to be causing acid rain in the area.

On 8 June, the Lopevi volcano began erupting and produced an ash cloud that rose ~ 6 km a.s.l. More than 0.9 m of ash settled on the uninhabited island of Lopevi and several inches of ash fell on the island of Paama. Paama's water supply was contaminated and crops were severaly damaged by the ash and gas. The inhabitants of Paama suffered from respiratory problems as a result of breathing the ash and gas. 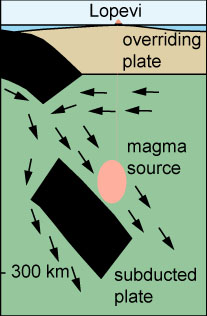 Cross-section of upper mantle and crust beneath Lopevi, northern Vanuatu volcanic arc. The eastward-moving Australian Plate, here made of oceanic crust and upper mantle, is subducted beneath the westward-moving Pacific Plate. Lopevi is on the Pacific Plate. The lack of earthquakes between 50 and 200 km depth suggests that the subducted plate has broken into two pieces. Magma is generated at a greater depth, relative to the southern Vanuatu volcanic arc. Rocks melt where the mantle in the asthenosphere is modified by fluids leaving the subducted plate. Compare to the tectonic setting of Lopevi, northern Vanuatu volcanic arc. Arrows show direction of flowing rocks in the asthenospheric mantle. From Monzier and others (1997).