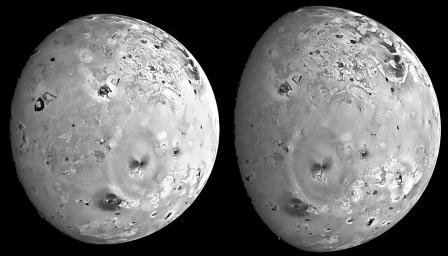 Two Galileo images of Io. These images reveal that the topography is very flat near the active volcanic centers such as Loki Patera (the large dark horseshoe-shaped feature near the top right edge in the left-hand image) and that a variety of mountains and plateaus exist elsewhere. Image courtesy of NASA/JPL.

The surface of Io has three common features:

Only about 5 percent of Io is covered by volcanic vents. About 500-700 volcanic centers have been identified but, over the last decade, most of the energy has been released at only four centers. The energy is released from these centers at enormous rates. Carr (1997) reported that 356 calderas had been identified in the Voyager and Galileo coverage. The largest volcanoes have diameters of more than 250 km and are closer to the equatorial region. Volcanoes at higher latitudes tend to be smaller, less than 100 km in diameter. The random distribution of Io's volcanoes suggests a lack of mantle convection, which is partially responsible for linear hot spot tracks and island arcs on Earth.

Paterae, low-profile volcanic shields are the most common type of vent. Their flows can cover large areas and reach lengths of 700 km. Such long flows suggest high eruption rates and/or low viscosity material. Some patera have summit calderas with relief of 1-2 km from floor to rim. The images above compare the 1979 Voyager 1 image of Loki Patera with Galileo images taken in 1996. The patera is at the center of the images. A dark fissure is just above and right of the patera. Voyager observed an eruption from this fissure in 1979. 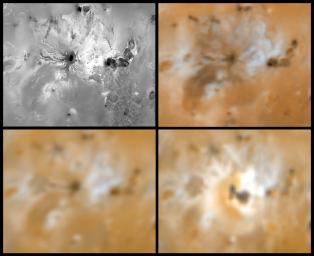 Ra Patera covers an area of 760 x 480 km and has numerous long, narrow flows that radiate from the summit. These views of Ra Patera show changes seen on by Voyager 1 (upper left and upper right), Galileo (bottom right), and Voyager 2 (bottom left). The Galileo images reveal the detailed morphology of new deposits. Dark materials are interpreted as the overflow of lava flows from the caldera. New bright deposits, also though to be lava flows, cover an area of about 40,000 square kilometers and surround the dark materials. Images courtesy of The Jet Propulsion Laboratory and NASA. Maasaw Patera, another shield volcano with summit caldera, has been compared to Volcan Alcedo in the Galapagos. The patera are thought to be made mostly of silicate lava flows with interbedded sulfur lava flows and pyroclastics.

Io may have calderas with active lava lakes and fissures erupting silicate lava flows. These calderas may be up to 200 km in diameter and are located on the surface of the plains. Volcanic plumes originate in some calderas.

‹ Inside Io up Eruption Styles ›