La Palma is a stratovolcano, and is the largest of the western Canary Islands. It stretches 21,320 ft (6500 m) above the surrounding ocean floor. Two main rock layers separated by a line about 1400 feet (427 m) above sea level make up La Palma. The lower layer is made of pillow lavas cut by basaltic dikes. The thickness of the pillow lavas range from 33 to 1150 ft (10 to 350 m). Most of the dikes are located within ~2 miles (3 km) of the west coast. The upper layer consists of basaltic lavas and pyroclastic rocks. Small alkalic domes have pushed their way into this area. Strong erosion of the island over time is shown by hundreds of meters of gravel mixed in with basaltic lava flows. The oldest volcanic rocks on La Palma are about 3-4 million years of age.

La Palma has seven historic eruptions, the most recent in 1971 from the Teneguia vent. Other vents formed in historic time include Tahuya, a cone of lapilli, scoria and bombs about 3,000 feet tall (1,000 m) tall that formed over a three month period in 1585 by Strombolian eruptions and San Martin, a cone and crater that formed over two and a half months in 1646. The eruption at San Martin produced large amounts of lapilli and also sent four lava flows down to the ocean. Recent craters and eruptive vents are located along a central line. A large canyon drains the calderas to the southwest. 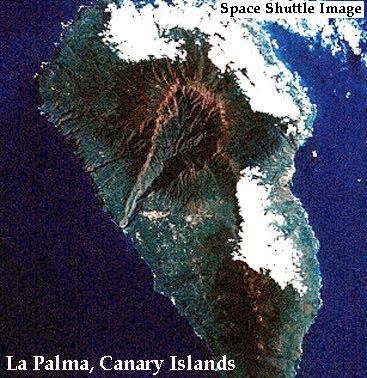