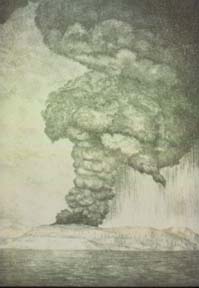 Krakatau erupted more than 10 cubic km of magma releasing 30-38 Tg of stratospheric aerosol in the Southern Hemisphere and 55 Tg of stratospheric aerosol in the Northern Hemisphere. Although Krakatau erupted a large volume, the magma was relative poor in sulfur, and the eruption had less climate impact compared to some small volume eruptions that were sulfur rich (e.g., Agung in Indonesia). The abundance of sulfur in a magma is inversely proportional to silica content. The basaltic andesite magma of Agung contained more sulfur than the higher silica magma of Krakatau. Rampino and Self (1982) estimated that the temperature in the Northern Hemisphere decreased 0.3 C due to the eruption. Drawing of the ash cloud from the 1883 eruption. Photo credit: National Geophysical Data Center (P. Hedervari).