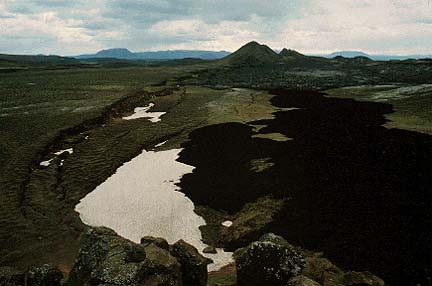 Krafla is a caldera which is ~6 miles (10 km) across. This caldera was mostly filled with eruptive material over the last glacial period. The fissure swarm connected to Krafla is 62 miles (100 km) long and ~3-6 miles (5-10 km) wide. About 35 eruptive fissures have opened along this swarm since the last glacial period. A high temperature geothermal field is located in Krafla's caldera. This field reaches temperatures of 644 degrees F (340 degrees C) at 1.25 miles (2 km) depth. This energy is now used in a geothermal power plant.

Krafla has been quite active throughout history. It has erupted 29 times. Its last eruption was in 1984. In 1724, Krafla began an eruption that lasted for five years. This eruption was called "The Myvatn Fires." It was named for the nearby area of Myvatn, which is a rich farming district and very well populated. During this eruption, lava flowed from a ~7 mile (11 km) long fissure until it reached ~12.5 miles (20 km) in length after one year. 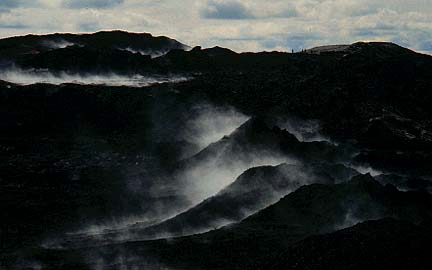 Fissures along a rift at Krafla. In the 1975-1984 fissure eruption, magma erupted from 3700 ft (1138 m) deep through these fissures. Since that eruption, this group of fissures has rifted about 26 ft (8 m). Photo taken and copyrighted by Peter Kresan.

Sinking occurs during volcanic activity at Krafla. This is due to horizontal flow of magma out of a magma chamber. The magma flows along a dike into the fissure swarm to the north or south. This dike is ~10-16.5 ft (3 to 5 m) wide, 50 miles (80 km) long and ~0.6-1.5 miles (1 to 2.5 km) high. Over 30 times more magma flows through this dike than reaches the surface. The tectonic phases that cause a rising and falling of the ground during active periods have lead to grabens being built in the area.

This 3 meter diameter hot spot is in the Namafjall area, in northern Iceland. Nearby is Krafla, an active volcano. - Uli Wagemann