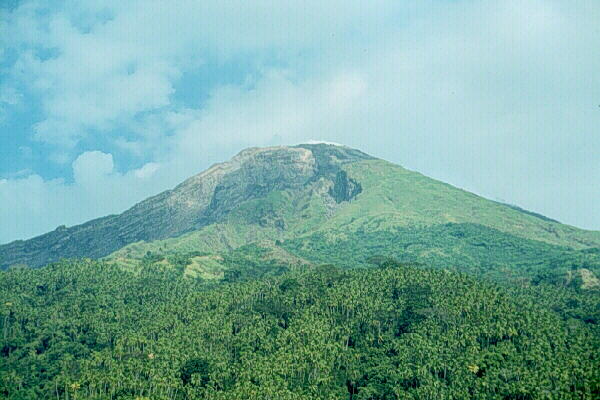 The Karangetang volcano is also known as Api Siau and is located on the northern end of Siau Island. The island is home to five summit craters. Karangetang is one of Indonesia's most active volcanoes. Since 1675, forty eruptions have been recorded. This is one of A type active volcanoes in North Sulawesi -Sangihe Islands volcanic arc, and located in the northern part of Siau Island. In 1974, during Karangetang's last major eruption, the entire population of Siau was forced to evacuate the island. Pyroclastic flow hazard have been noticed since the 1967 explosion, then in 1984-1985, 1988, 1992 and 1996. So far, the largest victims were 6 persons which were killed by a pyroclastic flow of the May 18, 1992 eruption. They were usually killed because of heat or at least heat injured. Lahars occurred in rivers after eruption producing pyroclastic flow deposits. 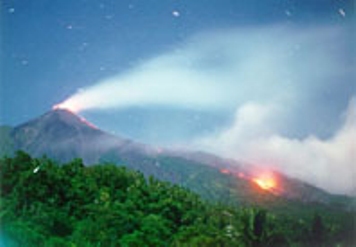 Photo courtesy of the Directorate of Volcanology and Geological Hazard Mitigation
Photographed by S.R.Wittiri

There is an island myth that says that the trees that surround the Karangetang were those that created it. Mysteriously the roots of the highest trees went towards a small hill and formed Karangetang (its form) and the roots went to the center and opened the Earth.

Sources include the Global Volcanism Program, the Directorate of Volcanology and Geological Hazard Mitigation, RedEscolar, and Vulcani & Vulcani, Italy