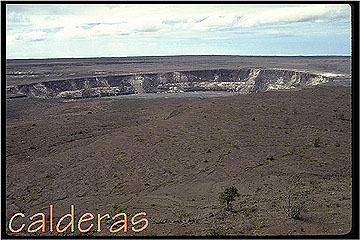 Located at the summits of both Kilauea and Mauna Loa are calderas. The areas of the calderas are 15 and 11 square kilometers, respectively, and their depths range from 140 to 170 m. The outlines of the calderas are distinctly non-circular, strong evidence that they result from the coalescence of more than one center of collapse. This is particularly evident in the shape of Moku'aweoweo, the caldera of Mauna Loa. Moku'aweoweo is strongly aligned in a direction that points towards the two Mauna Loa rift zones. The smaller collapse features that have coalesced to form Moku'aweoweo indicate the locations of zones of magma storage. This is evidence that the main magma chamber complex itself is aligned along these directions.

How do calderas actually form on basaltic volcanoes? Basaltic calderas are often shown as if they formed when a big piston-shaped cylinder of rock drops into the magma chamber, but this is not correct. A growing body of evidence is pointing to the idea that the calderas are sag structures that form when support is removed from below the summit. Walker (1988) showed that the cumulative subsidence of the Kilauea caldera has been funnel-shaped. (See below for the collapse and infilling history of Kilauea caldera since the arrival of Westerners. The bottom diagram shows the cumulative collapse to be funnel-shaped, not piston-shaped (adapted from Walker 1988). Additionally, a study of the eroded Ko'olau caldera showed that all the caldera-filling lavas have a centripetal dip (Walker 1988). The reason active Hawaiian calderas have steep walls is that surface rocks are too brittle to sag very well, and they fracture. The flat floors result from the re-surfacing by flows erupted within the calderas.

This resurfacing points to the fact that calderas are very dynamic features that are capable of collapsing and infilling many times. Indeed, ~25% of the surface of Mauna Loa is covered with lavas erupted ~600 years ago during a time when the summit caldera was full and overflowing (Lockwood & Lipman 1987)

This is not to say that distinct collapse events do not occur. Three large pyroclastic units have been mapped at Kilauea, and each can be correlated with a caldera collapse event (but not necessarily a caldera-forming event). The prevailing idea is that when magma drains suddenly from the summit region, support of the caldera floor is removed and collapse occurs. Groundwater is then able to flow inward towards the hot volcanic plumbing, and it flashes to steam, producing phreatic eruptions (as in 1924) or phreatomagmatic eruptions (as in 1790; e.g. McPhie et al. 1990).

Calderas are thus presumed to be have come and gone during the tholeiite stages of all the Hawaiian volcanoes, however, direct evidence is not present at all of them. Mauna Kea and Hualalai, for example, show no evidence of having had calderas in the past. As noted above, the "caldera" of Haleakala, although spectacular, is actually an erosional feature on the East Maui volcano, and evidence of a true volcanic caldera there has likewise not been found. 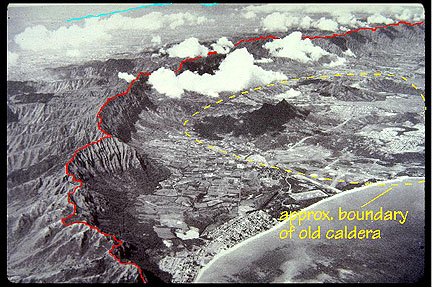 On some of the other older volcanoes the presence of old calderas manifests itself in sequences of thick flat-lying ponded flows, and areas of preferential erosion. This is particularly the case for East Moloka'i volcano. In these cases the centers of the volcanoes are now occupied by big holes. Caldera-filling lavas are usually easier to erode than flank lava flows because during the active period of the volcano's life the center of the volcano (the caldera) is the zone of greatest thermal and hydrothermal alteration and the rocks are quickly reduced to clays. An alternative idea is that the calderas happened to be in a state of collapse (rather than infilling) at the end of the tholeiite stage.

The image to the right shows the windward side of the old Ko'olau volcano (which comprises the east half of the island of O'ahu). The red line marks the crest of the pali (cliff). Numerous people have suggested that these cliffs are the scarp of the giant landslide that has removed most of the right-hand side of the Ko'olau volcano. If this were so, however, one would not expect there to be any high-standing intra-caldera rocks such as those inside the yellow marker. It seems more likely that the actual scarp is offshore from the present coastline; all the erosion between this scarp and the present pali has been accomplished by non-catastrophic processes since (but probably accentuated by) the giant landslide. 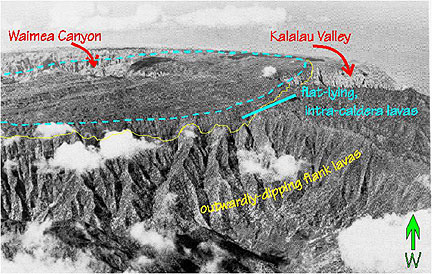 The situation seems to have been reversed on the old Kaua'i volcano. Here the ponded flows were so massive that they present more resistance to erosion compared to the flank lavas, and the outline of the old Kaua'i caldera is today marked by a high. relatively circular plateau. This also assumes that Kaua'i was only a single volcano, an idea recently challenged by Robin Holcomb of the USGS.

To the left is an air view (towards the west) of the caldera of Kaua'i volcano. Here the relatively horizontal plateau (outlined with the dashed light-blue line) consists of thick slightly more erosion-resistant lavas that ponded in the old caldera; it is topographically higher than the deeply eroded flank lavas. The yellow line marks the boundary between flank lavas and caldera lavas. Kalalau Valley and Waimea Canyon are eroding their way into the central plateau. Photo from Macdonald et al. 1983.