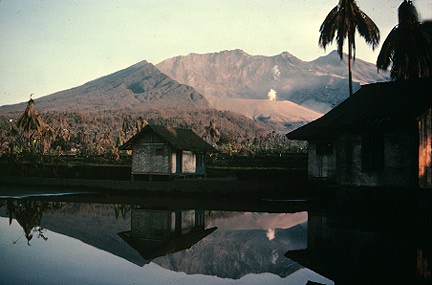 Galunggung is a stratovolcano on the west side of the island of Java. The caldera of Galunggung is open to the southeast. Photo by Jack Lockwood, U.S. Geological Survey, August 17, 1982. 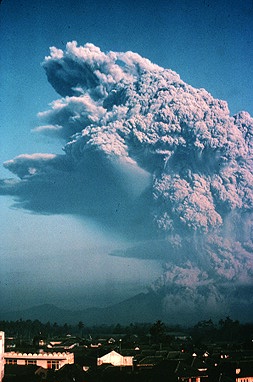 The first historic eruption of Galunggung was in 1822. Since then the volcano has erupted four times, most recently in 1984. This photo shows a column of ash rising above the summit during the large (VEI=4)Vulcanian-type eruption. Eruption columns at Galunggung reached heights as great as 15 miles (24 km). Photo by Jack Lockwood, U.S. Geological Survey, August 16, 1982. 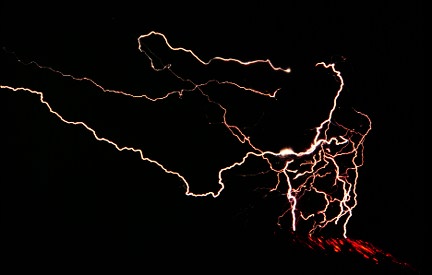 Two eruptions at Galunggung have caused fatalities. During the 1822 eruption (VEI=5), nuee ardentes and mudflows killed 4,011 people and destroyed 114 villages. The nuee ardentes extended up to 6 miles (10 km) away from the volcano. During the 1982 eruption (VEI=4) about 68 people died, mostly from indirect causes (traffic accidents, old age, cold, and lack of food). Estimated damage was $15 million and 22 villages were left uninhabitable. The 1984 eruption was phreatic and lasted about two weeks. This photo shows lightning above the summit and glowing pyroclasts on the flank of Galunggung. Photo by Jack Lockwood, U.S. Geological Survey, September 16, 1982. 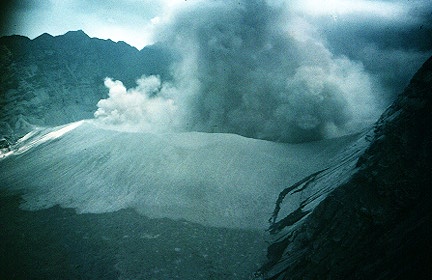 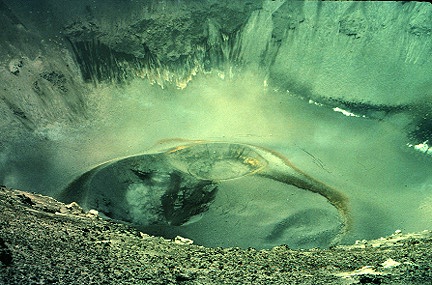 View of new cinder cone. As the 1982-1983 eruption waned a crater lake began to form. The presence of the lake, high rainfall, and the large volume of exposed pyroclastic material on the volcano have made the hazard associated with secondary lahars very high. The lahar deposits have been revegitated and a lahar warning system has been established. Photo by Jack Lockwood, U.S. Geological Survey, October 30, 1982.

During the 1982 eruption two jumbo jets entered the ash clouds at an altitude of about 6 miles (10 km). Their engines stalled and windshields were abraded. Fortunately, the pilots were able to restart the engines.