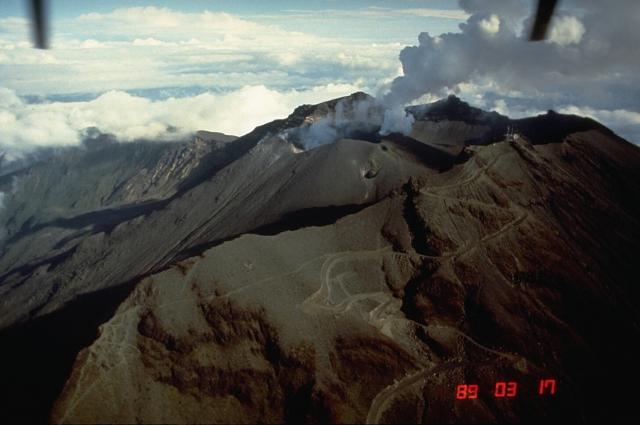 Galeras, a stratovolcano with a large breached caldera located immediately west of the city of Pasto, is one of Colombia's most frequently active volcanoes. It is seen here from the south on March 17, 1989, with steam clouds pouring from vents on the large central cone near the back headwall of the caldera, whose south rim forms the ridge in the foreground. Major explosive eruptions since the mid Holocene have produced widespread tephra deposits and pyroclastic flows that swept all but the southern flanks.
Source: Photo by Norm Banks, 1989 (U.S. Geological Survey).

Galeras, a stratovolcano with a large breached caldera located immediately west of the city of Pasto, is one of Colombia's most frequently active volcanoes. The dominantly andesitic Galeras volcanic complex has been active for more than 1 million years, and two major caldera collapse eruptions took place during the late Pleistocene. Long-term extensive hydrothermal alteration has affected the volcano. This has contributed to large-scale edifice collapse that has occurred on at least three occasions, producing debris avalanches that swept to the west and left a large horseshoe-shaped caldera inside which the modern cone has been constructed. Major explosive eruptions since the mid Holocene have produced widespread tephra deposits and pyroclastic flows that swept all but the southern flanks. A central cone slightly lower than the caldera rim has been the site of numerous small-to-moderate historical eruptions since the time of the Spanish conquistadors.

The above is a radar image of Galeras volcano in southern Colombia. Satellite images like this are valuable in studying volcanoes that can be dangerous to study on the ground. Galeras has erupted more than 20 times since the 1500s. Volcanic activity has been frequent in the last five years, including an eruption in January 1993 that killed nine people on a scientific expedition to the volcano summit. Chuck Wood of VolcanoWorld was on Galeras at that time but was not injured.

Galeras is the light green area near the center of the image. The active cone, with a small summit pit, is the red feature on the lower right edge of the caldera (crater) wall. The city of Pasto, with a population of 300,000, is shown in orange near the bottom of the image, just 8 kilometers (5 miles) from the volcano.

The image was acquired by the Spaceborne Imaging Radar-C/X-Band Synthetic Aperture Radar (SIR-C/ X-SAR) aboard the space shuttle Endeavour on its 96th orbit of the Earth on April 15, 1994. North is toward the upper right. The area shown is 49.1 by 36.0 kilometers (30.5 by 22.3 miles), centered at 1.2 degrees north latitude and 77.4 degrees west longitude. The radar illumination is from the top of the image. The false colors in this image were created using the following radar channels: red represents the L-band (horizontally transmitted and received); green represents the L-band (horizontally transmitted, vertically received); blue represents the C-band (horizontally transmitted, vertically received). Galeras is one of 15 volcanoes worldwide that are being monitored by the scientific community as an "International Decade Volcano" because of the hazard that it represents to the local population.