The Fort Rock Basin is a maar field in south central Oregon. Almost 40 maars, tuff rings and tuff cones exist in this basin. Most of these features are very eroded. The basin is mostly filled with lake sediments from the old Fort Rock Lake. Many normal faults run through this area. The maar volcanoes of Fort Rock Basin are short volcanic cones with wide, round craters. These are the result of explosions frombasaltic magma meeting surface and ground water as the magma rose to the surface. Eruptions produced cinder cones and lava flows where this water was not found. 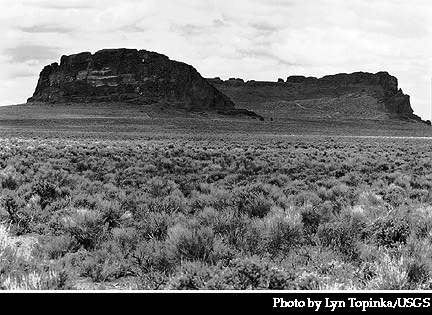 Fort Rock is an isolated tuff ring in the Fort Rock Basin. It has many cliffs and terraces formed when waves from Fort Rock Lake cut away parts of the crater walls. These features are ~4600 ft (1400 m) around and ~200 ft (60 m) high. The crater floor is 20-40 ft (6-12 m) higher than the floor of the old lake basin. The southern rim of Fort Rock has been broken by waves from the old Fort Rock Lake. Orange-brown lapilli tuff can be found in beds 0.4 inches to 3.3 ft (1 cm to 1 m) thick inside the crater. Rock beds on the inside of the crater dip at angles of 20-70 degrees. These are parallel to the crater walls, so the crater is probably shaped like a funnel. 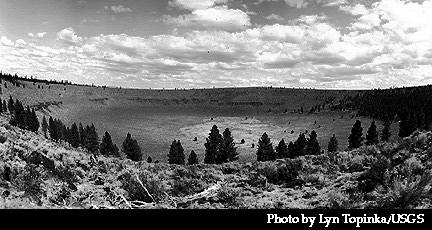 Hole-in-the-Ground is a circular maar in Fort Rock Basin. Its floor is ~500 ft (150 m) below the original ground level. The rim is 115-215 ft (35-65 m) above this ground level. This maar is ~5250 ft (1600 m) around. Most of the ejecta from the maar is very small, but some of the older blocks reach up to 26 ft (8 m) in size. The largest of these blocks were thrown up to 2.3 miles (3.7 km) from the center of the maar. Repeated sliding and sinking along a ring fault led to occasional closing of the vent, changing of the supply of groundwater, and repeated buildups of pressure. Four major explosive events resulted from these pressure buildups. Material was ejected at speeds of up to ~650 ft/s (200 m/s) at these times.