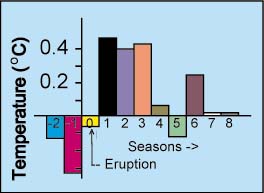 The 1982 eruption of El Chichón produced one of the largest sulfuric acid plumes this century. The eruption was immediately followed by an El Niño event in 1982-83, the largest El Niño of the century up to that time. Roback and others (1995) used three different models to see if the eruption volcanic eruptions might trigger or enhance the El Niño. One model, involving mid-tropospheric heating, did result in a weakening of the trade winds. This change was consistent with observed surface winds north of the Equator in the eastern Pacific Ocean. However, Roback and others (1995) noted that the 1982 El Niño event had started before this wind anomaly. Furthermore, they pointed out that only trade wind collapses in the western equatorial Pacific can initiate El Niños. They concluded that the El Chichón eruption and the large El Niño event were a coincidence.

Handler (1984) looked at all VEI = 4 or more historic eruptions to see if they were associated with El Nino events. He sorted the volcanoes by latitude. Low latitude (20 N to 20 S) eruptions are associated with an increase in sea surface temperatures in the eastern tropical Pacific Ocean (see above figure), the area where El Nino events begin. The warmer temperatures last up to three seasons after the eruptions. Handler called for further theoretical work on these observations.