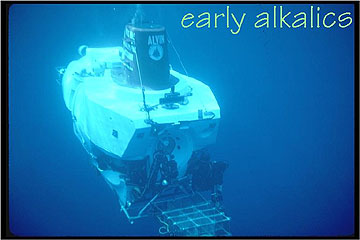 As a "new" portion of lithosphere (it is actually ~90 million years old in the vicinity of Hawai'i) moves over the hotspot, the effects are not instantaneous; the degree and amount of partial melting and magma production are small. Small percentages of partial melting produce magma that is rich in alkali elements relative to silica, (called alkalic basalt). This low-efficiency melting produces only small amounts of magma meaning that the eruption rate of a young hotspot volcano is not high.

The Lo'ihi seamount off the southeast coast of Hawai'i was known from bathymetric surveys (see below), and thought to be a large slump. However, dredging in the 1970's recovered fresh lava samples, and the growing HVO seismic network began to record earthquake swarms centered on Lo'ihi. Submersible investigations have confirmed that Lo'ihi is actually the youngest Hawaiian volcano, with its summit some 975 m below sea level (~4000 m above the adjacent sea floor). Geochemical analyses of Lo'ihi samples show many of them to be alkalic basalt. Lo'ihi has a flat top that may be an almost-filled caldera, and as we'll see later this means it probably also has a magma chamber. Many of the pillow lavas observed on Lo'ihi have little or no sediment on them, a good indication of their recent formation. 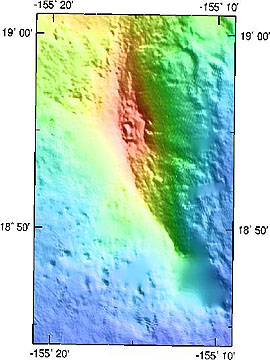 The map on the right shows bathymetry of Lo'ihi volcano, off the SE coast of the big island of Hawai'i. The colors go from deep blue (~4500 m depth) to red (~1000 m depth). Note the relatively flat summit that is pocked with a couple of pit craters. This summit is probably a filled caldera. A seismic swarm in July of 1996 was accompanied by the formation of a new pit crater near the SW edge of the summit. This diagram was kindly provided by John Smith and Terri Dunnebier of the Hawai'i Mapping Research Group.

Below is a photograph of pillow lavas near the summit of Lo'ihi taken from the research submarine ALVIN, in 1987. 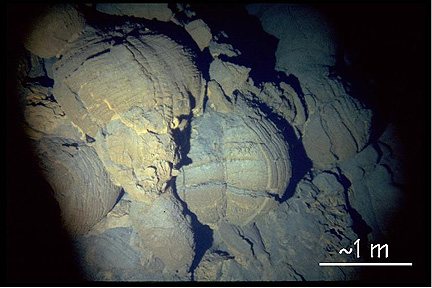