Any model for the emplacement of the Columbia River Flood Basalts must explain how lava that travels 600 km can still be hot enough to be chilled to glass as it entered the Pacific Ocean.

Shaw and Swanson (1970) proposed that high eruption rates were required. Great volumes of turbulent lava would reach the ocean in only a few days, thus staying hot. The fronts of these flows might be 50 m high and 100 km long. They would move at rates of 3 to 5 km per hour, down the gentle slope to the west. The eruption rate would need to be high, 1 cubic km/day/linear kilometer of fissure, about 1000-10,000 the eruption rates of Hawaiian and Iceland eruptions (mid-ocean ridges produce only 3 cubic km of lava each YEAR)(Swanson et.al., 1975). The flows would pond in depressions, making lava lakes 30-40 meters thick and 200-400 kilometers in diameter. A few years to a few tens of years would be need for the lava to cool completely (Long and Wood, 1986). 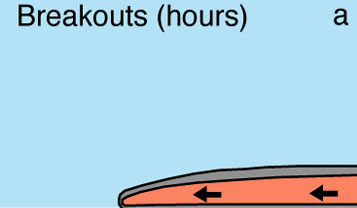 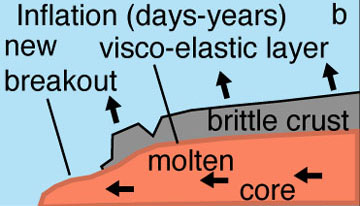 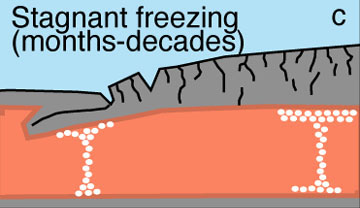 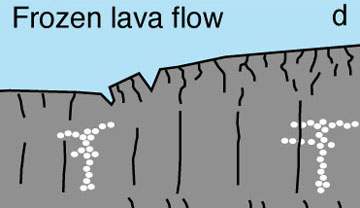 Hon and others (1994) studied lava flows in Hawaii and drew analogies to the Columbia River Flood Basalts. In Hawaii, they documented the growth and inflation of lobes of lava by the internal injection of more lava. With each pulse of new lava, the flow would grow thicker. Flows advance by breakouts at the front of the flow. Applied to the flood basalts, this process was non-turbulent and much slower but could still insulate hot lava great distances from the vent. Self and others (1997) concluded that flows covering 700 to 2,000 square km formed over many years, not days or weeks as implied by the early model. Cross-section of emplacement and inflation of a pahoehoe sheet flow from Self and others (1997).

Development of the Roza compound flow field based on the study of Martin (1989; 1991) and Thordarson (1995). Total time of emplacement for all five major flows is estimated to be 5-15 years. Insulating crust protected the interior, molten cores of flows and allowed the lava to travel great distance from its vent(s). As more lava erupted it caused inflation of flows and break outs of new lava at the flow front. Arrows show direction of flow. Thick bars represent vents. From Self and others (1997). 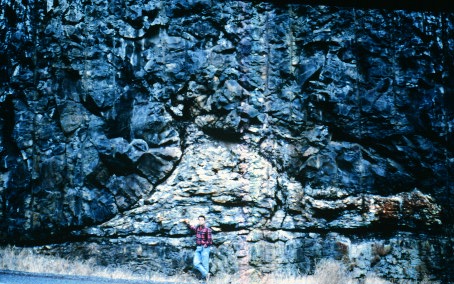 Numerous features indicate that inflation of lava flows played a major role in the emplacement and growth of the Columbia River Flood Basalts. This photo and sketch show four lobes of lava. A mound of sediment separates lobes 1 and 2. Lobes 2 and 5 are separated by a suture zone that developed between the two lobes as they inflated. Lobe 3 overlies the younger lobes 1 and 2. Photo and sketch courtesy of Thor Thordarson. 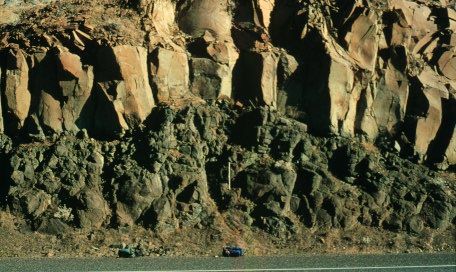 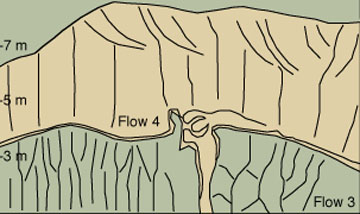 This photo and sketch show a tumulus with an axial crack about 50 cm in width (flow 3). As flow 4 covered the tumulus small lobes of lava filled the crack prior to the main core of the flow buried the entire tumulus. Tumuli are common features on inflated lava flows. Photo and sketch courtesy of Thor Thordarson. 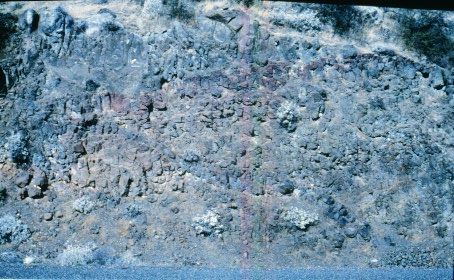 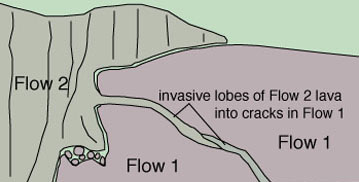 This photo and sketch show a tumulus (flow 1) with a large crack in its side. Flow 2 filled the low area adjacent to the tumulus and then sent two thin lobes (tongues) of lava into the crack. Photo and sketch courtesy of Thor Thordarson. 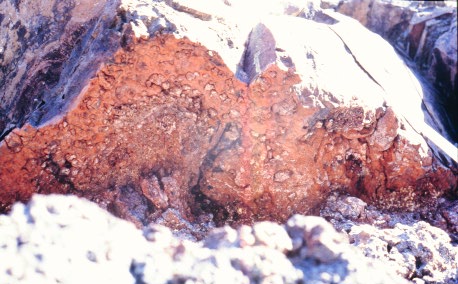 This photo shows the bottom of a pahoehoe flow in the Roza Member resting directly on a scoria bed.

The lava drapes over bombs and small clasts are embedded in the base of the flow. Photo courtesy of Thor Thordarson.