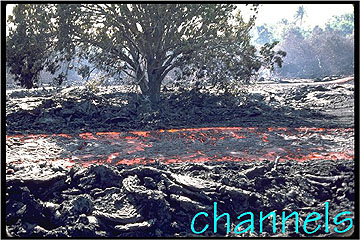 Channels (especially large ones) are associated with 'a'a flows. Pahoehoe flows sometimes have small channels. Channels form because the margins of active flows experience much more cooling and friction against the ground; they eventually stagnate but meanwhile the central part continues to flow (e.g. Hulme 1974; Sparks et al. 1976).

There are many forms of channels, depending on the degree of distinctness between the levees and the moving centers. The front of an 'a'a flow often moves as a single body of lava and has no channel. The margins of 'a'a flows have a distinctive cauliflower-like shape when viewed from above, which is caused by small surges of lava during flow. As soon as the margins begin to stagnate, however, the velocity difference between the margins and the flow center becomes large enough so that the lava begins to shear to make up the difference. At this point the channel may be evident only by two shear planes parallel to the flow direction. Eventually the levees stop moving altogether and the central part of the flow forms a well-defined, distinct channel. In such a case all the relative motion between the stagnant levees and flowing channel interior is taken up in thin zones at the very edges of the channel, and this makes the channel more efficient. In fact, velocities within channels have been recorded in the range of 60-80 km/hour (remember, this is not the speed of the flow front). Overflows from the channel usually coat the levees and build them up higher than the level of flowing lava. This channel evolution progresses downflow as the flow advances, with the well-defined channel lagging behind the actual flow front (by ~1 km on the 1984 Mauna Loa flow; Lipman & Banks 1987). This means that an 'a'a flow can be quite different depending on where you look at it.

Photograph of a small lava channel a few hundred meters upflow from the 'a'a flow front. This channel was about 3 meters wide.

The lava flowing within a big channel often looks very smooth, and you might want to consider it pahoehoe. However, the lava flowing rapidly in a big channel is almost certainly destined to become 'a'a when it reaches the flow front. This fast-flowing smooth-surface is probably the reason why many people consider pahoehoe to be faster than 'a'a. The important thing to consider though, is what the lava will eventually become and it is pretty clear from observed eruptions that flows with fast-flowing channels feed rapidly-advancing 'a'a flow fronts. Most channels don't have solid crusts because the rapid flow as well as the velocity gradient across a channel means that it is impossible for any crust to remain continuous. A solid crust is a good insulator so because they don't have one, big channels lose a great deal of heat; this combined with the vigorous stirring during rapid flow helps to explain why pahoehoe-looking lava in a fast-moving channel invariably becomes 'a'a by the time it reaches the flow front.

Diagram of a lava channel. The yellow planes are meant to illustrate how the central part of the channel moves faster than the sides. Torques (curved arrows) are set up by this velocity gradient, and continuously disrupt any surface crust that may form. For example, note that points A and B could rotate in different directions and pull the lava between them apart (adapted from Rowland & Walker 1990).