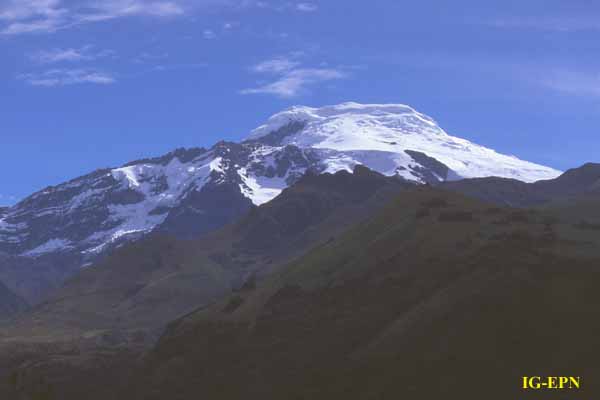 The massive compound Cayambe stratovolcano is located on the isolated western edge of the Cordillera Real, east of the Inter Andean Valley. The 5790-m-high volcano, whose southern flanks lie astride the equator, is capped by glaciers, which descend down to 4200 m on the eastern Amazonian side. The modern Nevado Cayambe volcano, constructed to the east of an older volcanic complex, contains two summit lava domes located about 1.5 km apart, the western of which is the highest. Several other lava domes on the upper flanks have been the source of pyroclastic flows that reached the flanks of the volcano. A prominent Holocene pyroclastic cone on the lower eastern flank fed thick lava flows that traveled about 10 km to the east. Nevado Cayambe was recently discovered to have produced frequent explosive eruptions during the Holocene, and to have had a single historical eruption, during 1785-86.

Cayambe, mountain of the sun, is at 5790m not only the third highest mountain in Ecuador but also in the northern hemisphere of the American continent. It lies right on the equator and the meridian reaches its highest point at 4600m just south of the peak in its journey around the globe. Renowned British climber Edward Whymper and his two Italian guides and companions Juan Antonio and Luis Carrel were the first successful climbers to get to the top in 1880.