(Based mostly on the work of V. Acocella)

Sand box models can provide excellent scaled analogues of collapsed super volcanoes (calderas) and can be used to simulate the collapse of the roof above a magma chamber (fig. 1)

Why do we use them?

They are very useful because by simulating collapses you can see features in 3-D and compare them with real examples, a very clear picture of the caldera geometry can be made!

How can you make a sand box model?

To make a box sand model you will need: 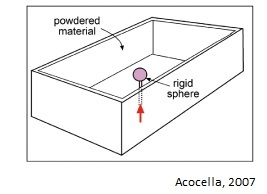 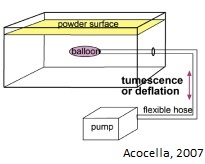 An up warding rigid sphere or a balloon connected to an air machine, to simulate the magma chamber (fig. 2)

There are three primary types of experiments:

Overpressure: Are those where the sphere rises or the balloon inflates, both simulating a magma chamber growth (doming or resurgence):

Underpressure: Are those experiments where the balloon is deflated and mimics the collapse behavior in calderas

Polycyclic: Are those experiments where inflation is followed by deflation and a consecutive inflation of the balloon, producing a cyclic rim and radial fractures:

This one is the most 'realistic' because it simulates the case of caldera collapse after a large ignimbrite eruption empties the magma chamber. 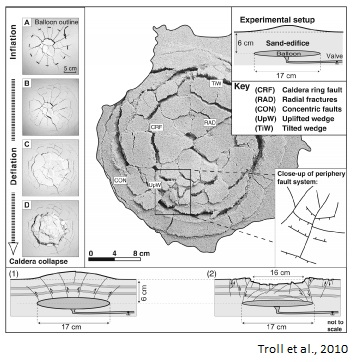 What do we see?

In the case of underpressure collapse (the more realistic case and common among World’s calderas) we can expect the following set of features:

Real examples of these geometries include: 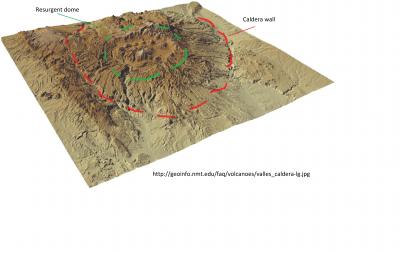 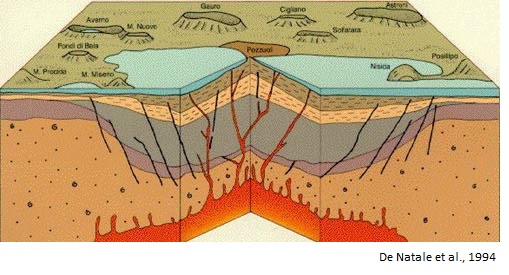 How do we use these results to understand calderas?

The results bring important issues related to location of faults, their development in time and their geometry. This knowledge could be used to understand geometries on old eroded calderas (cauldrons), “younger” calderas <10000 ka or very new (active) ones like Yellowstone.

The classification of the five main calderas types (downsag, piston, funnel, piecemeal, trapdoor) do not examine: (a) the structure of calderas (particularly the nature of the caldera's bounding faults); and (b) how this is achieved (including the genetic relationships among the five caldera types). The first part of this study reviews these experiments, which induce collapse as a result of underpressure or overpressure within the chamber analogue. The experiments simulating overpressure display consistent results, but the experimental depressions require an exceptional amount of doming, seldom observed in nature, to form; therefore, these experiments are not appropriate to understand the structure and formation of most natural calderas. The experiments simulating underpressure reveal a consistent scenario for caldera structure and development, regardless of their different boundary conditions. These show that complete collapse proceeds through four main stages, proportional to the amount of subsidence, progressively characterized by: (1) downsag; (2) reverse ring fault; (3) peripheral downsag; (4) peripheral normal ring fault. The second part of this study verifies the possibility that these latter calderas constitute a suitable analogue to nature and consists of a comprehensive comparison of the underpressure experiments to natural calderas. The general relationship between the evolutionary stage of a caldera and its d/s (diameter/subsidence) ratio allows such quantification, with stage 1 calderas characterized by d/sN40, stage 2 by 18bd/sb40, stage 3 by 14bd/sb18 and stage 4 by d/sb14. The four stages adequately explain the architecture and development of the established caldera end-members along a continuum, where one or more end-members (downsag, piston, funnel, piecemeal, trapdoor) may correspond to a specific stage.

The authors used field data and experiments scaled to the island of Gran Canaria to clarify the structural, temporal, and genetic relationship of peripheral faults to the central caldera. The experimental setup comprises a cone of medium-grained sand in which a rubber balloon was repeatedly inflated and deflated. Balloon inflation resulted in updoming and a dominantly radial fault pattern, whereas balloon deflation caused piecemeal caldera collapse and a concentric peripheral fault arrangement on the edifice flanks. A complex interplay of repeated inflation and deflation cycles of the experimental magma chamber is found to explain the peripheral fault system of the Tejada caldera on Gran Canaria and offers insight into the structure of the caldera floor and the mechanisms acting in multicycle caldera volcanoes

This page was created as part of the OSU Volcanology 2010 class by Rodrigo Iriartea.