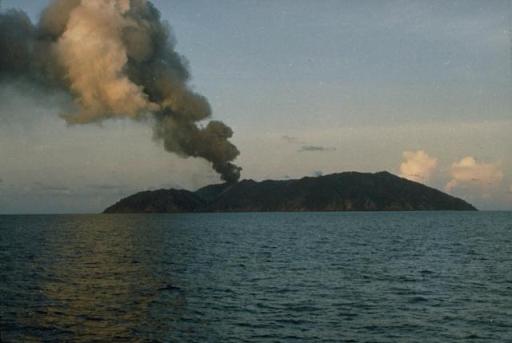 An eruption column in 1991 rises above Barren Island, the only historically active volcano along a volcanic arc connecting Sumatra and Myanmar (Burma). The small 3-km-wide island contains a 1.6-km-wide crater partially filled by a cinder cone that has been the source of eruptions since the first was recorded in 1787. Lava flows reached the coast during several recent eruptions.
Photo Credit: Photo courtesy of D. Haldar, 1991 (Geological Survey of India). 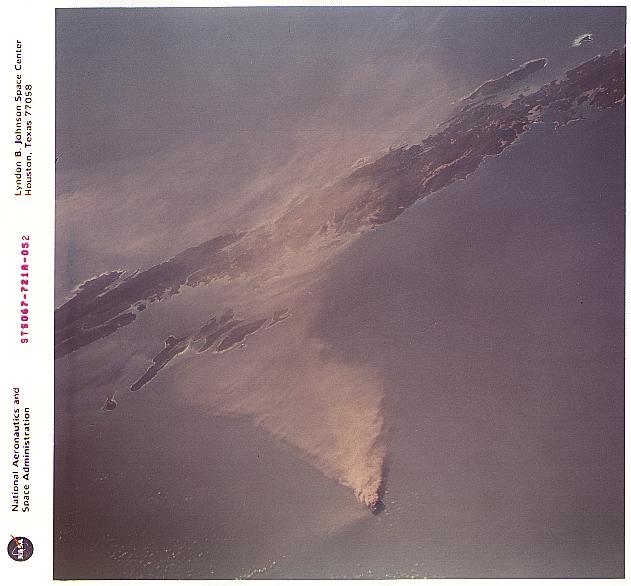 This photography from the Space Shuttle shows an eruption plume from Barren Island, a stratovolcano in the Indian Ocean. The view is to the northwest. There have been at least five moderate sized explosive eruptions at Barren Island since 1787. The eruption in 1991 lasted six months and caused some damage. The most recent eruption began in 1994. This photo was taken on March 10, 1995 from an altitude of 183 nautical miles. Shuttle photo STS067-0720-0024. Barren Island is about 400 miles (650 km) from southeast Asia.

A new eruption at Barren Island was first noticed by the Indian Navy on 20 December 1994. A team composed of scientists from the Geological and Zoological surveys of India arrived at the island early on 24 January, and an aerial survey over the volcano was made on the 31st. As of 22 February, this Strombolian eruption was still "in its initial stage, gradually gaining momentum." Vegetation in the path of the advancing lava flow has been destroyed.

During January and February, a thick column consisting of pale brownish gas, dark ash particles, and white steam was rising ~200 m from the crater area at intervals of 30 seconds, accompanied by continuous rumbling and intermittent "cracking" sounds. Two new vents were active, the first within the main crater near the SW corner, and the second ~50 m from the summit down the SW flank. The eruption is believed to have started from the flank vent, around which a new 100-m-diameter subsidiary crater had formed.

Liquid lava emission was volumetrically minor; most of the eruptive products consisted of cinder and volcanic bombs. Incandescent material rising to heights of 20 m could be seen from 4 km offshore. Particles ranged in size from a few cubic centimeters to ~1 m3, with the average size being slightly less than 10 cm3. Ejecta filled the pre-existing valley, located S of the western- most 1991 lava bed, from which lava flows travelled ~1.5 km from the active vents into the sea, producing profuse steaming at the ocean entry. The moving lava front was ~50 m wide and 6 m thick by 22 February. Megascopically the lava was basaltic andesite, similar to that erupted during September 1991, with a high percentage of large plagioclase phenocrysts and frequent olivine in a dark-gray glassy groundmass.

On 9 March at around 0530 GMT astronauts on the Space Shuttle noticed a small plume rising from Barren Island. A short video recording (~15 seconds) showed a "V" shaped plume that extended for ~3 km before dispersing. Visible imagery from the NOAA-14 (at 0730 GMT) and GMS (0430-0830 GMT) satellites failed to reveal a volcanic plume.