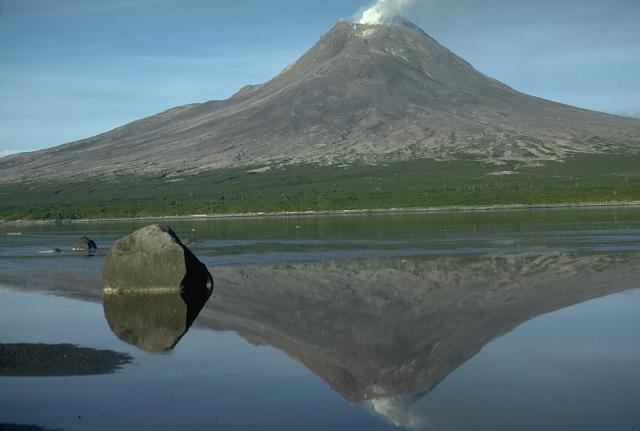 This view from the NW shows the steaming summit of Augustine in 1986 reflected in a shallow lagoon separating the main island of Augustine from West Island. Twentieth-century eruptions have included explosive activity with pyroclastic flows and lava dome extrusion. Photo by Lee Siebert, 1986 (Smithsonian Institution).

Augustine volcano, rising above Kamishak Bay in the southern Cook Inlet about 290 km SW of Anchorage, is the most active volcano of the eastern Aleutian arc. It consists of a complex of overlapping summit lava domes surrounded by an apron of volcaniclastic debris that descends to the sea on all sides. Few lava flows are exposed; the flanks consist mainly of debris-avalanche and pyroclastic-flow deposits formed by repeated collapse and regrowth of the volcano's summit.

The latest episode of edifice collapse occurred during Augustine's largest historical eruption in 1883; subsequent dome growth has restored the volcano to a height comparable to that prior to 1883. The oldest dated volcanic rocks on Augustine are more than 40,000 years old. At least 11 large debris avalanches have reached the sea during the past 1800-2000 years, and five major pumiceous tephras have been erupted during this interval. Historical eruptions have typically consisted of explosive activity with emplacement of pumiceous pyroclastic-flow deposits followed by lava dome extrusion with associated block-and-ash flows.

Augustine is part of the Aleutian volcanic arc and is made of several lava domes and steep, short lava flows. Debris avalanches form an apron around the volcano and indicate repeated collapse of the central domes. Many of the debris avalanches extend offshore. Debris avalanches that reach the inlet have the potential to generate tsunami. A tsunami was generated during the 1883 eruption that had a height of 30 feet (9 m) at Port Graham. Historic eruptions were recorded in 1812, 1883, 1935, 1963-64, 1976, and 1986. Augustine's eruptions tend to be highly explosive and tend to spread ash across the Cook Inlet region. The eruption commonly end with the less explosive extrusion of a lava dome.

This photo was taken on March 27, 1986, during the initial highly explosive stage of the eruption. Photograph by M.E. Yount of the U.S. Geological Survey. Photo courtesy of NOAA'S National Geophysical Data Center. 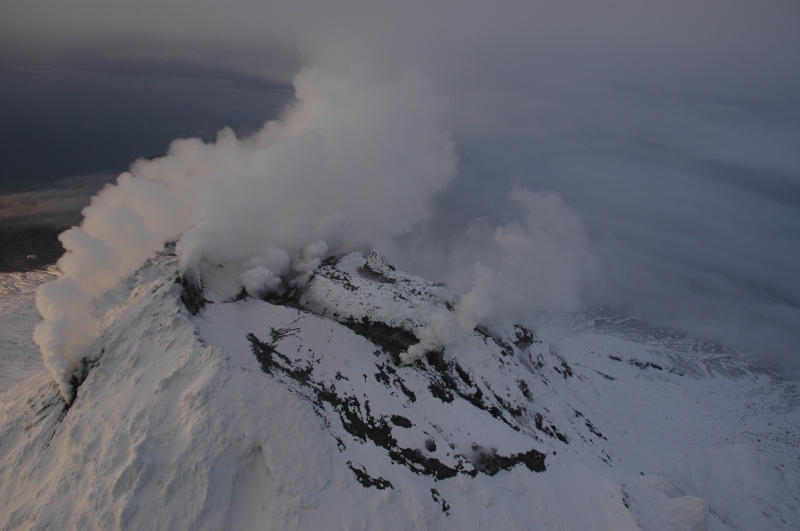 The Alaska Volcano Observatory is the primary source for information about Augustine.