Alamagan is a stratovolcano about 30 km south of the island of Pagan.
Two historic eruptions are suspected in 1864 and 1887.
Photograph by Norm Banks, U.S. Geological Survey, May, 1981. 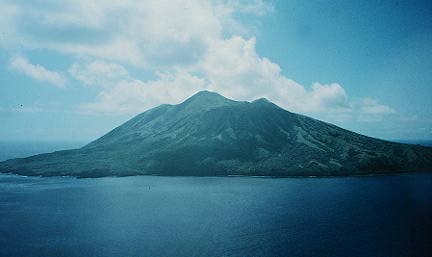 The Mariana Islands are a classic example of an island arc, a curved line of stratovolcanoes that rise up from the ocean floor.

The Mariana trench, ridge, and islands. Based on Schmidt (1957), U.S. Geological Survey.

The islands owe their origin to subduction, the tectonic process that thrusts one plate beneath another.

Simplified cross-section of the subduction zone of the Mariana arc.

Based on earthquake locations in Samowitz and Forsyth (1981).

The distribution of earthquakes reveals the location on the subducted Pacific Plate beneath the Mariana Islands. From the deep Mariana trench to a depth of about 100 km the plate is subducted at a gentle angle. From about 100 to 680 km the plate is subducted at a near vertical angle. Some geologists believe that the downward gravitational force of the steeply dipping plate is enough to pull the Pacific Plate away from the mid-ocean ridge, essentially providing a driving force for plate tectonics. Other geologists believe that the plates are pushed away from the mid-ocean ridge by forces generated at the ridge. Most geologists would agree that both forces are important.