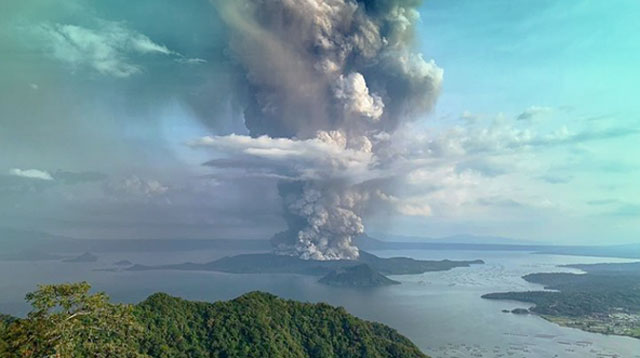 Dr. Alka Tripathy-Lang, Ph.D. (@DrAlkaTrip) reports:   "Before Sunday, Jan. 12, the Philippine volcano Taal was at Alert Level 1, out of 5, indicating a low level of abnormal activity. At 1 p.m. local time, the Philippines Institute of Volcanology and Seismology, PHIVOLCS, began to raise the alert level, and by 7:30 p.m. that day, they issued an Alert Level 4, indicating that a hazardous explosive eruption is possible within hours to days."

Check out this link for more information on the rate of ground deformation and a fantastic webcam video showing the moment of eruption!

VW alum Dr. Chuck Wood added "Taal is an ashflow volcano (or super volcano) that has in the past had massive eruptions that sent ash around the world and often caused significant climate cooling. There has not been such a massive eruption anywhere in the world since modern science developed and we don’t know if a given precursor signals a normal eruption or a very large one. Yellowstone Natl Park is in a similar mega-caldera that has had recent episodes of inflation, but no eruption"